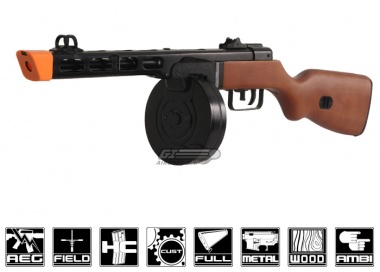 Here is more information on some of the kinds of electric guns, and if you have any specific questions, you can always call us and speak with a dedicated Airsoft customer service person.

These guns have an automatic three round burst capability, as well as can be operated as a semi-automatic if desired. That’s why they are called automatic electric airsoft guns. They are the most common kind of airsoft gun.

Low Powered Electric Gun – This type of airsoft gun is less powerful than the automatic version. They are not as well made, are less expensive and less powerful. They are considered as low end airsoft guns and possibly only of novelty value.

Medium Electric Gun – There are also mid-range versions of electric models and these are better quality than the low powered versions. Some are clones of other designs and mock Marui or Classic Army models.

Electric blowbacks: Otherwise called EBBs, they are high end versions. They mostly appear in the form of rifles and use a 9.6 volt battery. They are called blowback because they simulate the blowback of a real gun.

Mini electrics: Some types of electric guns are smaller in size and can only be fired in fully automatic mode. They aren’t replicas of real guns like some airsoft models. However, they aren’t good for playing games due to short range and poor accuracy.

In addition to the above categories, electric airsoft guns also have power ratings that relate to the feet per second the projectile moves. For instance, an Airsoft Glock would have a lower power rating as it is used mostly for close combat situations. On the other hand, a player who takes a sniper position will need an Airsoft rifle with considerably more power as the projectile has further to go.