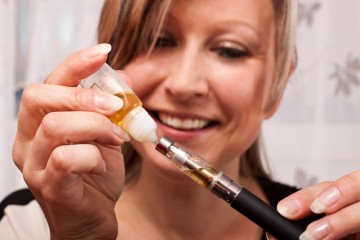 VGOD EJuice formed for vapers by vapers, with a focus on creating some delicious flavors and big clouds for the vaping community. Each VGOD EJuice is made by using the maximum amount of VG, allowing vapers the ability to create the largest clouds and awesome smoke tricks. They have many different flavors, some popular ones they feature include Blue Dream and VNGEL. When purchasing VGOD EJuice, vapers have the opportunity of choosing how much nicotine they wish to be included. If they decide to go nicotine free, these bottles are available as well.

VGOD EJuice is available online in bottle sizes that are accommodating to each vaper, 15ml, 30ml, and 120ml. In addition to 0mg nicotine, other strengths include 03 mg, 06 mg, 12 mg, and 18 mg. With such a wide range of strengths, cutting slowly back on nicotine could be easily accomplished for those who wish to do so.

Some Sensational Flavors of VGOD EJuice

VGOD EJuice Reckless has a creamy flavor of sweet strawberries, bananas, and cherries. These fruits combined, give Reckless a perfectly balanced taste which vapers are looking for. Another popular flavor for VGOD EJuice is Blue Dream, with sweet lush blueberries and citrus. This combination is one that every vaper enjoys, with many choosing it for their all-day vape. This e-juice remains both pleasant and refreshing while also being bold.

VGOD EJuice VNGEL is a flavor in which strawberry loving vapers dream of. There are four different types of strawberries used in this liquid, with some being a tad tart and some being large juicy ones. These flavorful strawberries are dipped in a sweet tasting whipped cream to bring a unique flavor that vapers adore. VGOD EJuice has made a flavor that is exceptional, simple, and clean.

No matter what flavor of VGOD EJuice you choose, expect to receive and extraordinary flavor with huge clouds.